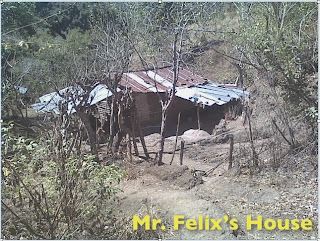 Cabanas (pronounced Cab-an-yas) - that's what they call it, in english it means "cabins). 93 families, almost 1000 people, considered by the El Salvadorian government to be the poorest of the poor, tucked in a valley between two mountain peaks. One road in that hugs the mountain, barely, and gives way on the other side to a vertical drop of 700-1000ft. We inched along this trail to build the first house in this new location. We couldn't get near the site by truck and therefore had to carry all the building materials and tools in by hand, down a narrow, winding, rising and falling, rock laden path.

Is it worth it? I think we all asked ourselves that, as we drove the 1.5 hours to get the area, and then drove the mountain pass, and then carried everything in slowly by hand. Did I mention it was hot? Really hot? I even wore a hat!!

Three things that stand out for me today. The first, was hearing from a man named Adonai, who has worked with Campus Crusade for Christ for 35 years in El Salvador. Among the many things he shared with us, this stood out. They (CCC) have realized the importance of not only sharing the message of salvation, but also demonstrating the gospel message. They have recently begun work in this area and the EMCC is hoping to partner with them, and a local church to bring the message, verbally, literally, and physically to them. I was blown away by what the Lord is doing globally. Creating an awareness among Christians all over the world of the need to bring good works with the good news. The second highlight, therefore is all the more awe-inspiring, because with this message being shared, the first home owner of this area - Felix ( a man twice a widower, who is raising three children)- accepted Christ as His Saviour. They have lived in their "cabin" for years, they barely eat two meals a day, one meal consists of half a bowl of salt, with a jalapeno pepper and a tortilla. His daughter has had an ear problem, he has poor eye sight and old glasses that no longer have the arms, but he strings them around his head in the hopes that they will work. Is it worth it? You should ask Felix who also, in addition to receiving a new home (from the Lord), was also told that there was a medical clinic and an eye glass clinic happening in the town on Wednesday. Amazing!!

The third thing is that it turns out the typing for a living does not toughen your hands up, and forgetting your work gloves in Sarnia really makes that obvious. I have blisters on top of blisters and blisters on places on my hands that I didn't know it was possible to have blisters, and it turns out that carrying aluminum sheets that have been sitting in 40 degree sunshine without gloves is really painful on your blisters, and that all the contractor, builder guys that are on this team find that a source of amusement.

One more thing...I was asked this morning to preach at the Wednesday night church service. The Lord had impressed upon me last week, the passage in Genesis 21 about Hagar and Ishmael being sent away by Abraham. So hopefully between tomorrow and Wednesday, I can figure out why. Thanks for praying...The Lord is at work here and it's a privilege to be one small part of it.
Posted by Deve Persad at 11:22 PM 3 comments: