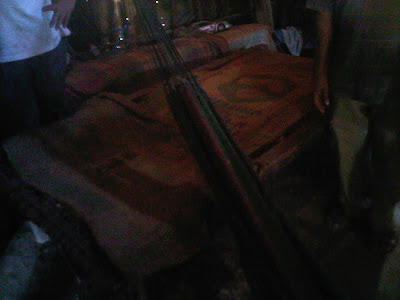 Last October, when the SEMC team was here, we built houses despite the fact that the area was trapped under a tropical storm that brought 4 feet of rain over 11 days. I remember standing on the cobble-stoned roadway, at the top of one of many mountainside rises. I remember watching the water stream between our legs, under our vehicles and down the hill. I remember saying, "I wonder where all this water ends up, it's got to stop somewhere."
Today, we found one of the places that the rain accumulates. In rainy season it can be manageable, but in a relentless torrent of rain, like the one last October (by the way it hasn't rained since) there is no escape. The river that flows through this small community of 727 people, fills up to overflowing, washing away fields, homes, livestock and crops. But that's just the water from below. From above, higher in the mountain range the Hydro company releases water from it's dam during storms in order to control it's production. Sometimes they warn the village sometimes they forget. The flooding from below and from above create further instability in an already fragile community. (The picture on the left, shows the inside of the home on the adjacent property, the bright dots are holes in the wall; the family sleeps on empty rice bags which are laid on a frame of old wood and rope.)
Therefore, to be able to build the first new, stable house in this community meant a time of rejoicing for many, a time of gratitude from a family, a time of blessing for our team, and a time of sober realization for me: awestruck by the thought that maybe God heard my question that day six months ago and today showed me that we could be part of the answer.
Deve
Posted by Deve Persad at 12:29 AM 2 comments: