Did we mention it rained.... 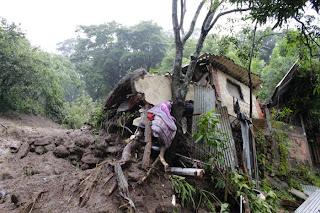 You may have heard that our week in El Salvador was impacted by rain. It's possible to process that information through our own understanding of "rain". On Saturday night on our way to our Airport Hotel, we had to be re-routed because the Highway was closed due to mudslides and accidents. We drove past many mudslides along the circuitous (code for we got lost and had to be directed back) route to our destination. When we awoke in the morning, many streets and roads were closed because of the damage sustained through the night.
As it turns out, we received over 1 metre (3 feet) of rain during our time in El Salvador. Thousands of people in lower lying regions have been evacuated from their homes (again) and the loss of life continues to climb.
Yes, we are safe and back at home...but we are sobered by the reality that many people, for whom God has given us a love, do not have those options...what we do is so necessary...Have you ever stood inside a shack made of branches and mud, watched the water stream between your feet (remember you are inside)? Have you ever seen the walls disintegrate before your eyes or watched the rain leak onto the only bed you have for your family of 6. Have you ever stared out the window to clothes that hang on a line waiting...hoping...for the sun to come out and dry them? Have you ever watched the rain rushing down the rock riddled roads and wonder, where is it going, where will it collect and who will be at the bottom...?
So some may say we should be thankful for being removed and for being safe and dry and we are. But, the greater feeling is not a desire to revel in my comfortable surroundings and hear words of "well done" or "you're fortunate to be home". No, my greatest desire is to evaluate my gratitude knowing that a family of 3, 5 or 11 have a more resounding Spirit of Praise and Thanksgiving, making $40/month and living in a place that I find hard to just visit for a few days.
Am I deep-to-the-core-thankful for My God who loves me and saves me and gives me life or am I thankful for the comfort I live in? It's another reminder that I have so much yet to learn. Thanks to those who are willing learn along with me.
Deve
Here's what the news has to say about it:

The death toll from torrential rains in Central America over the past week has almost doubled since Saturday, with a further 25 lives lost in El Salvador.

A tropical depression that swept in from the Pacific on Wednesday caused mudslides and chaos on roads and forced thousands of people to abandon their homes in the chain of countries between Mexico and South America, killing 81 so far.

On Saturday, the death toll stood at 45 in the region, home to some of the poorest countries in the Americas. El Salvador, a nation of about 6 million people, was the worst affected overnight, with accidents pushing up the number of victims there to 32.

"The situation has got even worse. It's still raining heavily in various parts of the country," El Salvador's president, Mauricio Funes, said in an address late on Sunday.

Many of those killed in the country died in mudslides, an official from the local emergency services said.

The rainfall was so strong in the area around the municipality of Ciudad Arce, north-west of San Salvador, that rescue operations had to be suspended for a time.