Wow! I am writing to you from the stunningly beautiful country of El Salvador. I say "wow" because I don't think that I really thought I'd ever be here. I spent many years reading blog post after blog post of these trips to El Salvador, trying to soak up as much as I could about these trips and what they were like...hoping one day I'd be able to be on one, yet never really thinking it could happen. So many things/people/my own fears had to be figured out before this could even be possible. Yet, here I am. God made a way.

What a beautiful way it is. I must say living vicariously through the blog really doesn't do this country justice. One simply has to see it for oneself. It is stunning. Majestic skylines with volcanos looming above, giant mountainous hills covered in lush green vegetation and yellow hued corn fields all around. (Of course these sights are perceived while traveling in the back of a truck, not the most luxurious way to see the sights, but quite possibly the best way:) ) In town and even in the country, everywhere you look there is colour! I just love all the bright colours! Our translator said that people paint the houses the bright colours because they are happy colours. I agree. They even colourfully paint and decorate the grave stones of their loved ones. Their cemetery is sparkly and brightly coloured, such a contrast to our norm.

Today our team, along with a Shelter crew of builders, translators, family coordinator, driver and with a large group of community members built 4 houses. Our team split into two teams, so each team built two houses each. I had the opportunity to hear two of the new homeowners' stories. Both are single mothers with children to care for. They are women of great strength who have worked hard to do whatever is needed to care for their children.  It still amazes me the way God answers prayers. The first woman hadn't had a home of her own in seventeen years. She had been living with relatives and her children had been moving around with her. Today, God answered her prayer and her house went up. Today, she has a place for her children to call home.
The second mother, had a family in which her kids were now beginning to look out for her. Her health was requiring her to slow down now, after her many years of looking after them. The kids adore their mother and had worked hard to clear the land for their new home. Despite all they had been through, the young adult daughter's smile was simply stunning. There was just something about her smile that brought me so much joy. I also had the privilege of praying over this second family. Words just aren't made for that feeling... 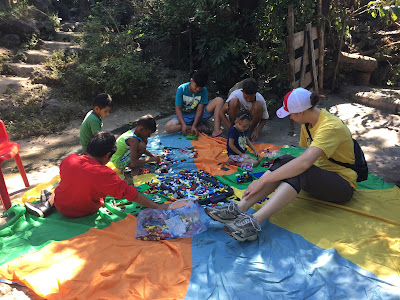 I also got the role of playing with the kids today. Everyone was busy putting houses together and I was busy building lego houses with the community kids :) Watching the kids build their own creative building was really awesome. I think each of their building was a reflection of who they are. I just have to say that one little boy named Walter, built a four story lego house! It was really awesome and he placed lego construction men all around the building to show that they were building. He was quiet kid, but I could see a budding architect in him!

There is so much more I could write, so much more I could say about these first two days in El Salvador, but that would likely fill pages. So I'll simply finish with this thought. I thought coming to El Salvador would feel foreign, maybe a little frightening, maybe jolting...but instead I've found that it feels quite familiar and even welcoming. I was trying to figure out why that is, when this thought came to me. It's because God is here. It's not foreign to me because I didn't leave God's presence. He is still with me, same as when I'm in my own country. Not only is He with me, but He is here in this country as well. The evidence of His presence is all around - in the scenery, the smiles, the answered prayers, the Shelter workers, the community volunteers, the kids. God is here.