The Best Gift You Can Give

Stories. You hear them, you tell them. Some are amazing, some are inspiring, and some... not so much. I'm going to share a story I heard today and you can be the judge.


Hugo Antonio, he is 17 years old (the same age as I am). He lives with his mother and his younger sister. He was in the first family that we built for today. There is no father figure in this home, so Hugo has had to step up and fill this role.

Each family that we build for has to clear and level a spot of land upon which  the house would be built. Hugo, being the man of the household, had the responsibility of doing this. The only dilemma is the land he had to prepare was not level at all, in fact, it was on the side of a hill. To level the ground, he had to dig down at least 6 ft on the one side. The top 8 inches (at the most) was dirt, the rest was rock. The community leaders told him that if the land was not ready, he would not get the house and it could be some time before he could get the opportunity to receive another house. So he hacked through the rock for 18 hours a day, for 7 days straight, with next to no breaks. All by himself. 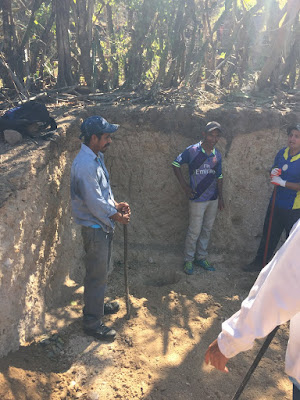 After all of this hard work, there was a big pile of dirt and rock. He rented two bulls and a cart and loaded the dirt and rock into the cart and transported it to four other sites that houses were being built on. The other families would have had to purchase this dirt in order to level their plots of land. This took him two more 15 hour days to complete.

Before coming on this trip, I was having a conversation with my dad about coming on this trip taking a week away from school and how one of my teachers was not very supportive in that decision. After discussing this for a while, he finally said to me, "If you need to justify your decision to your teacher, tell them the best gift you can give in life is your service to others."

One of the questions we asked Hugo was: Why did you deliver all of the dirt to the other families when it was not your responsibility? His response was that he didn't have any money and with Christmas coming around the corner, he couldn't buy any gifts for his friends and their families. He knew that his friends would have to spend the little money they had on dirt to level the land for their houses. He thought he could bless them with the gift of his service by delivering the much needed dirt.

Being the same age as Hugo, I try to put myself in his position and I wonder if I would ever do the same. Not only did he take care of his family and make sure their land was ready for their new home, he took it one step further, and blessed others with his service. Hugo's story inspires me not to just think only of myself, but to go to extra mile, take the extra step, and to serve others to the best of your  ability.